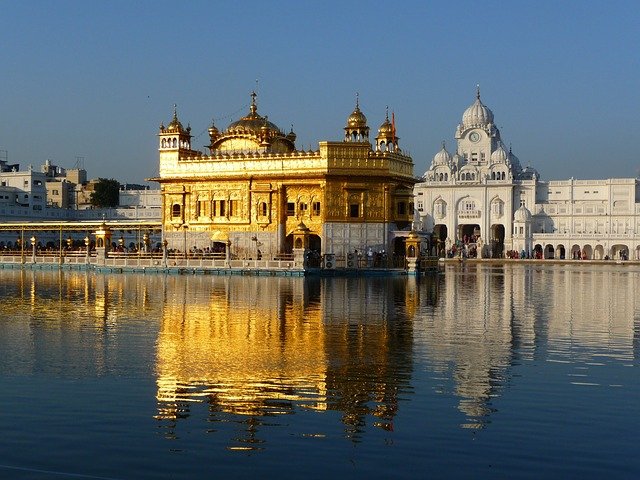 In the northwest of India is the city of Amritsar, Punjab state. It is considered sacred for the Sikhs, representatives of one of the official religions of India. But a temple popularly known as the Golden Temple was built there. Is the temple made of gold? And why was it built?

The main attraction of the city is Harmandir Sahib or the Golden Temple. It is located in the middle of the man-made pond, thanks to which the town got its name. Harmandir Sahib is the most important temple of the Sikhs. Each of them tries to make a pilgrimage to this holy place.

Who are the Sikhs?

India is one of the most multinational states in the world. More than a hundred nationalities live on its territory. The official religion in India is Hinduism. It is practiced by about 80% of the population. Among the adherents of other faiths, Muslims, Buddhists, Christians, and Sikhs stand out, which account for about 2% of the country’s population. In the world, the number of followers of this religion reaches 22 million.

Religion is the ninth-largest in the world. Sikhism is a religion in its own right. It was founded in northwest India in the 16th century. The basis of faith is monotheism – the existence of only one God. The founder of the religion is Guru Nanak.

Sikhs express a brotherly attitude towards all people, regardless of their social status and caste. They believe that God is present everywhere, so everything should be done with love. Their long beard and turban-like headdress can recognize Sikhs. It is called dastar. Sikhs are famous for their strength and bravery, so there are many military and rescuers among them.

There is a history about a battle in which a Sikh war was beheaded, and he fought with his head severed. The headless warrior is depicted on one of the frescoes of the Golden Temple.

Information about the temple

The temple is located in the middle of a reservoir that was dug in 1577 by the spiritual teacher Guru Ram Das. He was named Amritsar, which in Sanskrit means “the source of the nectar of immortality.” The first stone of the temple was laid in 1588.

The construction lasted 16 years. Harmandir Sahib architecture is a combination of Islamic and Hindu styles. Its vault resembles an inverted lotus, and it symbolizes the desire of the Sikhs to live a pure life. The dome and ceiling of the temple are made of plates plated with pure gold!

The original sacred text of the Sikhs, “Guru Granth Sahib,” is kept in the Golden Temple. It was written over two hundred years, from 1469 to 1708. The text contains revolutionary hymns that speak of the qualities of God and the need for meditation. Guru Granth Sahib is a collection of prayers composed by Sikh gurus. At the entrance to the Golden Temple, music is heard performed by monks who sing these texts in the Gurmukhi language.

A narrow marble bridge leads from the shore of the reservoir to the temple. It is believed that the path that is traversed on this bridge separates the righteous from the sinners. When entering the temple, you need to take off your shoes and socks. Further, people pass through a shallow bath, thereby washing their feet. You must enter the temple with your head covered. At the entrance, scarves are distributed free of charge.

The temple complex has a Museum of Sikhs, which tells about the history of their religion. Admission to it from 7 am to 7 pm is accessible in summer, and winter from 8 am to 8 pm. In addition to the museum, there is a Sikh parliament on the complex territory, in which regular meetings are held. It is located in a separate building called Akal Takht.

Also, among the attractions of Harmandir Sahib, it is worth highlighting the Baba Atal tower. It was built in memory of the deceased son of the sixth guru Atala. The boy resurrected a friend who a snake bit. His father scolded him for this since only God can give and take life. As a sign of remorse, the boy took his own life.

There is a free dining room for pilgrims and tourists in the Golden Temple. It prepares flat cakes and vegetarian dishes. In the dining room, volunteers are encouraged to help with cooking and washing dishes and donations for the poor.

Since the Sikhs consider openness to be the basis of their religion, any tourist is allowed into the Golden Temple, regardless of religion, so any guest is welcome here! You can get to the city of Amritsar with a transfer to Delhi.