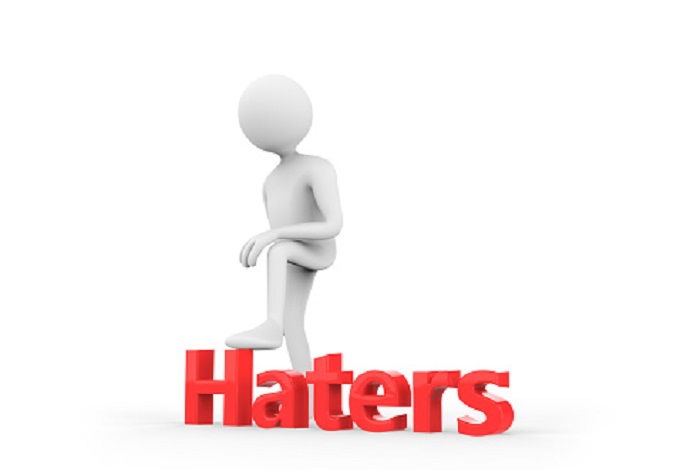 Haters and trolls are new inhabitants of our world. We learned these words when we began to master the Internet and especially social networks. Who are the haters, what do they want, and why do they behave this way? Yes, these are questions of concern to many people. We learned that haters act this way for one reason only! Just one at a time. Not more. What is this reason? Read on!

Art or disease: haters and why they hate us

Let’s say this: The reason haters hate us is simple. These people probably have certain psychological problems. By bullying, they get a sense of unlimited power over their victims.

This is the reason for the persecution of haters. It’s another matter if you are the victim of such bullying. What should you do in this case?

The phenomenon of people harassing other people via the Internet and social networks is called cyberbullying. This is a relatively recent phenomenon, although hating certainly has a long history. This phenomenon has affected many historical figures, as well as hundreds and thousands of ordinary people.

The difference with modern hating is that haters no longer need to watch you on the street or at the door of your house. You need to go online. Our privacy has become much more accessible to strangers than before.

Online hating has advanced technologically. So, you can “automate” your, so to speak, work: spam with letters, throw comments on the posts of victims, etc. Using tags, you can notify friends and relatives of this person about some terrible gossip, reveal the “skeletons in the closet” and spoil the reputation.

Do haters tell the truth or lie? Few people understand this. The victims only have to remain vigilant and promptly remove unwanted tags with their names. The Internet has made the art or disease of hating anonymous.

And because of this, the haters began to do more and more cruel things with their victims. Sometimes haters even create entire blogs. There they discuss people to their heart’s content. Other haters take jobs with their victims, socialize with their friends or relatives. Even children.

So what reasons do haters have for hate? One main reason is the desire to assert yourself. However, we can break this desire into 10 sub-reasons:

Now let’s take a look at each of these points. Haters most often attack stars. From the outside, celebrity life seems like heaven. And such an alignment does not suit the hater at all. He thinks like this: why does one get everything, and the other does nothing? Hate as a way to restore justice is a dubious undertaking, you say. However, haters don’t think so. They have different logic.

Sometimes they can deliberately make their victims worse – first of all, in their own eyes. The flaws that haters invent often have nothing to do with reality.

There are plenty of reasons to hate. It’s enough not to like the hater! He may pounce on you simply because he got up on the wrong foot in the morning. These people live according to another – their own – logic.

Did you know that squatters in Spain intensified their activities during the coronavirus pandemic? Previously, they seized empty buildings, non-residential ones. Now they also seize buildings whose owners are temporarily away. So it seems to them that they are restoring social justice, even with the help of robbery, violence, threats. Bullying is very similar to this process – capturing a person into psychological captivity.

What is the logic behind the haters?

Life for them is a war. And in war, as you know, all means are equally good. The haters deliberately inflate the scandal. A striking example is a discourse around feminists. There is nothing terrible in the struggle of women for their rights.

However, the first feminists were called ugly and lonely women, rude, arrogant, child-hating, etc. And why? Yes, simply because these women have broken the stereotypes of the right wife and mother in our societies for centuries. But now, we look at these processes with completely different eyes.

Haters also crave belonging – like all people. Only they realize this desire through their extremely specific haters’ environment. It is the need for a sense of righteousness and unity.

Haters are sincerely convinced that their cause is good and right. In addition, they get rid of accumulated negative emotions, relax, let off steam. The anonymity of hating on the network guarantees their safety, the absence of serious risks.

Well, how can I say … Albeit by accident, but once a hater blog benefited society. With the help of their website, it was possible to expose and catch the scammers. However, this is an isolated case. As a rule, the haters’ environment is a breeding ground for fakes, rumors, gossip, and other inaccurate information. By the way, haters are not always an organized group. Sometimes it is one person.

Victims react to bullying in different ways. Someone ignores haters; someone benefits from them but what, free PR! Other people sometimes need psychological help.

Sometimes hater attacks take on such a frightening scale that people have to move to another residence and even change their name! What can you say … In a word, we should learn resilience, the ability to filter information and not give ourselves offense.